skip to main | skip to sidebar

Sunshine at Summit Lake was sweet. The snow was quite good, and companions were exceptional. DP, Pete and yours truly ascended the Summit secret and found sweet snow. We were a testament to powder diversity. DP rode his split board, Pete free-heeled, and this photographically challenged blogger rode alpine touring gear.

Imagine some great photos of sunshine, powder, and a beautiful mountain, as they are forever recorded in my mind's eye, but unfortunately not in my camera because I left the flash card in my laptop. I really do deserve to be fired as a blogger for such incompetence.

Though I'm a failed photographer, this fact detracted only one ever so tiny whit from what otherwise was an exceptional powder day!
Posted by Alaska Jack at 6:32 PM No comments: 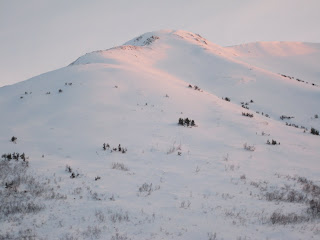 The secret shown to me by Pete must be kept, but this preserved powder can be found in the Summit Lake region. The secret is right there for all to behold. Ya gotta go to know. 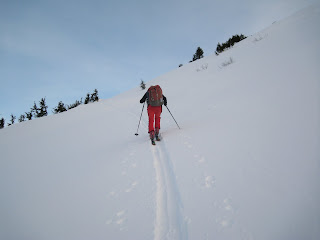 And even if you do go, the super secret stash remains out of sight, hidden. Tucked behind a ridge out of sight is a classic alpine bowl, crowned with rock outcrop, and reigning above a perfect glade. Scaling the ridge for 2 hours, I had no clue there existed a beautiful bowl over the horizon until I followed Pete's traverse around the ridge and into it. Awestruck, I had to stop and stare. Today, the hidden bowl was slightly windlicked, so after one run there, we skied on the front side where the snow was sweeter. The super secret stash will have to wait. 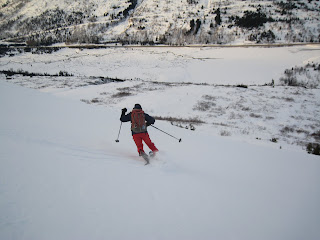 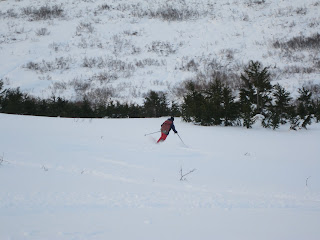 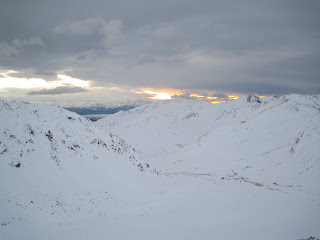 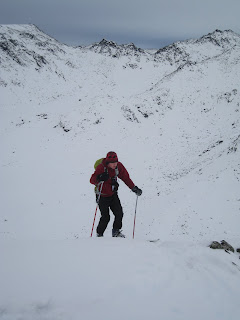 Few stones were uncovered, but we scraped just enough rockage to inhibit a freely flowing powder descent without fear. It was a good day, none the less. Lucy, Lige, Nathan, Eruk and yours truly scaled Microdot to find adequate snow and a couple of rocks. With a mere 23" snow pack recorded at Independence Mine, it was not surprising that we turned on a rock or two. 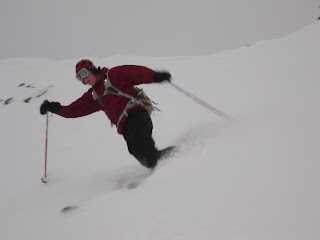 Posted by Alaska Jack at 8:21 PM No comments: 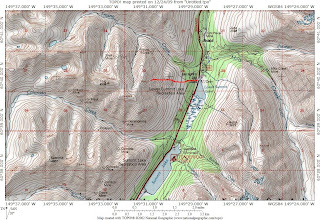 The Summit Lake area is the highest point on the Seward Highway, not the snowiest. Turnagain gets the award for snowfall, but Turnagain was wet at the road this morning, and I hoped Summit Lake with its 300 ft greater elevation would have a subfreezing temperature.

Summit Lake (Lower) snow was crunchy at the road, and a rain crust persisted for about 200 ft vertical. But, the snow was splendid at elevations above 1500 ft. 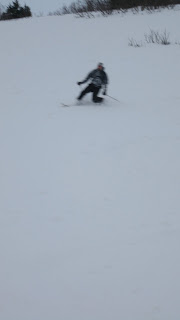 Following a skin track west from the road at the Lower Summit Lake turnout, I came upon Aaron from Anchor Point and his 4-legged companion, Stella. We were both rookies on this route, but we decided to push the ascent up to the exposed rocks on the ridge. The mountain hemlock glades held great snow, and this line is on the list to visit again. 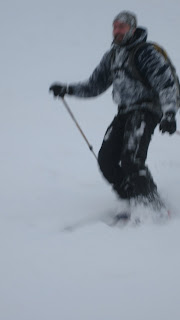 Posted by Alaska Jack at 9:02 PM No comments: 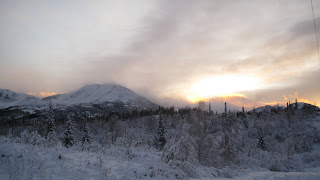 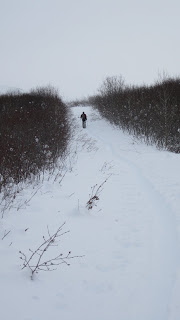 AV lived up to its name yesterday. White-out blowing snow on the uppper reaches pushed us down into the alders and forests on the south side. Jrock, J48 and I cut it short after a couple of runs.
Good on the Anchorage Ski Club! From a distance, it appeared they were conducting training.
Posted by Alaska Jack at 8:12 AM No comments:

Rusty's approach, grueling as it was with knee deep snow and 10 below ambient (Farhenheit), was even tougher for Eruk when his Voile binding broke, but more on that later. Rusty's exceptional and unique line down a narrow gully holds great snow. Starting from an alpine bowl and funneling into a gully, the line is a terrain trap that could be deadly if you choose the wrong day. Eruk, Lucy and yours truly are living proof that is was stable enough yesterday. But, Rusty is not recommended for those unfamiliar with the snow pack.

The present snow pack is not yet settled, and breaking trail was slow going. The exceptional descent down the gulley was worth the pain. The gully alders out, and moose trails are the ticket through the alder thickets covering most of the lower part of the hill. Of course, moose trails meander a bit, occasionally deadend. But, following tracks of the big ungulates finally, after a couple of backtracks, leads to the Middle Fork Trail.

Middle Fork Trail from the bottom of Rusty back to the Near Point Trail is a touring dream, slightly downhill almost always with a ski track. We were lucky and a nice track was already set in the trail for us.

More on Eruk's broken Voile. I hate to be a hater, but I've witnessed and experienced too many Voile binding failures. On a Crow Pass trip after hiking on foot for 2000 ft vertical, I broke a Voile binding bail on the first ascent after less than 500 ft of skinning. Fixed it up with repair kit wire, and 4 hours later, broke the other one on what turned out to be my last ascent of the day, more wire got me down the mountain just fine. Maybe I'm too harsh with Voile because Eruk's Voile was an old vintage, some might say antique, at least of classic age. I say Voile in the singular because Eruk's front range touring setup consists of a pair mismatched skis with Voile (broken) on the left ski, his 1980's Toute Neige (snow of any kind), coupled with what originally was a downhill ski of similar dimension and Pitbull binding on the right. With his old Asolo double boots, the true telemarker throw-back is complete. The system works, or worked until the Voile failed.

At least Eruk's toeplate remained in tact. He was able to lash his boot to the toeplate with some rope. He made it down Rusty roped into his binding. I was awed by the boot-ski connection Eruk improvised; he stayed in it on a steep, narrow pitch with some bushwacking, and then more than a mile on the Middle Fork Trail. 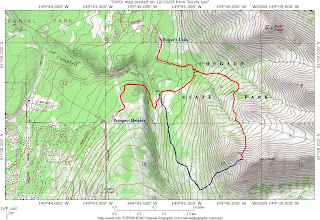 Eruk and Lucy launched from Prospect Heights, and I started from Roger's Lake. We met up at the junction of the Near Point and Wolverine Trails, skied up and over Rusty's saddle, and back down the Middle Fork Trail. Lucy led Eruk back to Prospect, and I trudged home. Arriving late after some trail breaking on Backdoor Trail, I was in big trouble with my beautiful better half for arriving way after dark.
Posted by Alaska Jack at 6:44 AM No comments:

Whew! Couldn't let the fresh foot settle, had to ski it! Bodacious breaking it was on the Basher Backdoor Trail tonight. Worth every bead of sweat, too!
Posted by Alaska Jack at 9:39 PM No comments:

Lucy, Eruk, and yours truly tested the Lips today. Snow in the alpine had been worked by the wind, but careful selection yielded boot-top bliss. We gave up on Lips and crossed Spokane Creek above its gorge to try the glades on Pete's North.

Enthralled with Pete's North glades, we couldn't stop and skied to the precipice above Spokane Creek gorge. We backtracked a bit, and made our way through the hemlock forest to the road. Snow in the forest was crunchy as usual. It was an adventurous new route for all of us, one I would like to repeat.

Like a few other aspects around Turnagain Pass, evidence of a slide was apparent on a northwest-facing aspect above Pete's North glades. Exposed rocks with rubble about 500 ft vertical below; the debris appeared to be weathered as if it had been there a few days.
Posted by Alaska Jack at 6:27 PM No comments:

No Bridge to Somewhere & Cornbiscuit

The Winner Creek cat trail and dead-ended at the Winner Creek no bridge to somewhere, Kodi the uberdog, J-rock and I learned. The bridge footings and supports are in place on each side, but the main span is gone. Someone had propped a 3x8 timber across the creek, about 3 feet above the torrent and 8 feet across the water. Three inches of ice crowned the timber. We weren't confident we could safely cross without crampons.

We shifted our objective to Cornbiscuit, skied back to the car, and drove to the pass. Had time for a single lap. Snow was worked by the wind on the more southerly facing slopes, but really sweet on the west side and lower on the mountain.

I probably should be fired from this blog for my incompetent photography. I thought I took a lot of great shots today. But, now I find no images on my camera card. %^&^$%#!

The cat was on the trail, grading it for the season. Maybe the Powder Guides will rebuild the bridge soon.
Posted by Alaska Jack at 5:35 PM 2 comments: 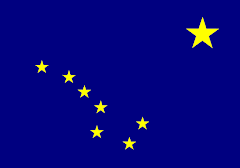